Water temperature on the beaches of Armenia

Most popular locations in Armenia over the past week

Conditions of sea water on beaches in Armenia

Now in the beaches in Armenia, the water temperature is very low and not suitable for swimming.

The water temperature in Armenia has risen over the past 10 days, but has dropped compared to 30 days ago.

For the two most popular locations for swimming in Armenia, the graphs of changes in the average water temperature throughout the year are as follows: 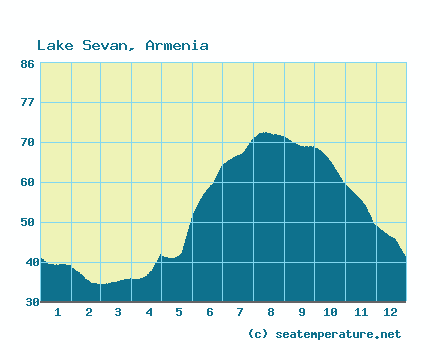 We process, analyze and store data for every beach and city in Armenia. Below is a table with current weather data and trends in some places of the country.

Armenia is located in Europe. The country has no access to the sea. In Armenia, we show the temperature in one lake.

Continental, mountain. The weather, regardless of the time of the year, often varies greatly even at nearby points, which is explained by a rather high altitude and a strong rugged landscape. In general, summers are hot and dry, and winters, although short-lived, are quite severe. In the foothills, the average temperatures in summer are from +24 to +26 o C, in winter - about +5 o C. In mountainous areas, the average temperature in summer is from +10 to +22 o C, in winter - from +2 to -14 C depending on height places. Even within the same city, the temperature difference between two neighboring regions can reach 2-3 o C. In the autumn-spring period, severe frosts are frequent, while the temperature on the soil can drop to -28 oC. Precipitation is 200 to 800 mm. per year depending on the height of the place. The maximum is observed in spring and early summer, the minimum - in the second half of summer and winter. In winter, in the mountainous regions there is a lot of snow (up to 100-150 mm.) That remains on the slopes until March-April, and on the peaks - all year round.