Water temperature on the beaches of Argentina

Most popular locations in Argentina over the past week

Conditions of sea water on beaches in Argentina

Now in the beaches in Argentina, the water temperature has different values. There are very cold locations, there are cool places, and there are resorts with warm and comfortable water.

The water temperature in Argentina has increased both over the past 10 days and over a month.

Today the warmest water in Argentina is recorded in Tigre. Its value in this location is 75°F. And the coldest one is in Puerto San Julian, its value 47°F.

For the two most popular locations for swimming in Argentina, the graphs of changes in the average water temperature throughout the year are as follows: 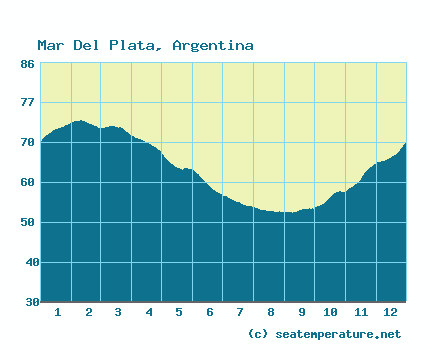 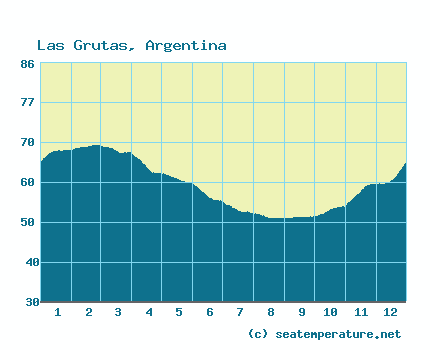 We process, analyze and store data for every beach and city in Argentina. Below is a table with current weather data and trends in some places of the country.

Argentina is located in South America. The country is washed by the Argentinean Sea. Argentina - has a fairly long coastline. To determine the temperature of the water in it, we track 16 settlements and resorts.

The climate in Argentina varies from subtropical in the north to humid tropical in the center of the country and temperate in the south. The vast plains in the east of the country and the high wall of the Andes in the west lead to the fact that the moist sea air masses coming from the Atlantic Ocean pass almost unhindered over the entire territory of the country, pouring out on the slopes of the Andes with heavy rains. In the central regions, a noticeable lack of precipitation is often experienced. The average temperature in the summer (January) in the northern regions is +28 o C, in the center about +24 C and in the south +10 o C. In winter (July), respectively +18 o C, +15 C and +1 o C. Precipitation from 100-300 mm per year in the plains of the west of the country, up to 1400-1600 mm in the northeast and on the mountain slopes. In winter, some inland areas are prone to drought. In the Andes, the climate is extremely diverse. The eastern slopes of the mountains are characterized by rainy weather and frequent floods in the summer season, while the highlands sometimes receive no more than 200 mm of rain. The average temperatures here range from +26 C at the foot of the mountains to +4 C at high altitudes, while even within one day the temperature drops can reach 30 o C. Frequent dry hot winds of the «probe» and «diaper», and above the plains of the pampa and Patagonia often have powerful storms.