Water temperature on the beaches of Albania

Most popular locations in Albania over the past week

Conditions of sea water on beaches in Albania

Now in all beaches in Albania, the water temperature is quite comfortable, and in some places it is very warm and even hot.

The water temperature in Albania tends to decrease, its value has decreased both over the last 10 days and over the month.

Today the warmest water in Albania is recorded in Saranda. Its value in this location is 79°F. And the coldest one is in Durres, its value 75°F.

For the two most popular locations for swimming in Albania, the graphs of changes in the average water temperature throughout the year are as follows: 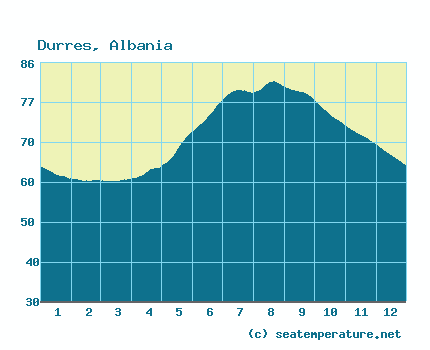 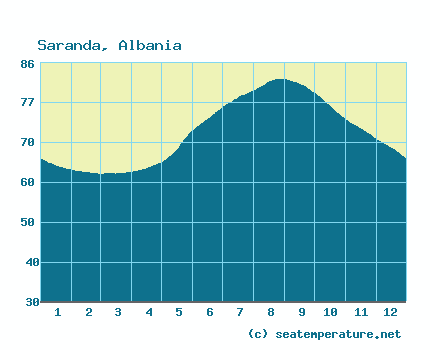 We process, analyze and store data for every beach and city in Albania. Below is a table with current weather data and trends in some places of the country.

Albania is located in Europe. The country is washed by the Adriatic Sea. Albania is a small country. To determine the temperature of the water in it, we monitor only seven settlements or resorts.

Subtropical Mediterranean and temperate. Summer is hot and dry (average July temperature is from +24 C to +28 o C, January is +4 C in the north and up to +7 C in the south). Winter is cool and humid (from +14 C in the south to +6 C in the north). In this case, the temperature regime strongly depends on the height of the place above sea level, therefore, in some areas in winter the temperature drops to -12-20 o C, and in summer it does not exceed +10 o C. Precipitation is 600-800 mm. per year, with a maximum in the fall and spring. In mountainous areas, annual precipitation increases from 900-1200 mm. on the east, up to 2000-2600 mm. and more on the windward western slopes of the mountains. At altitudes of more than 1000 meters in mountainous areas, snow cover lasts for several months.