Water temperature on the beaches of Abkhazia

Most popular locations in Abkhazia over the past week

Conditions of sea water on beaches in Abkhazia

Now the water temperature in the beaches in Abkhazia is cool. Swimming in this water can be uncomfortable.

The water temperature in Abkhazia tends to decrease, its value has decreased both over the last 10 days and over the month.

Today the warmest water in Abkhazia is recorded in Heivani. Its value in this location is 59°F. And the coldest one is in Akhali Kindghi, its value 57°F.

For the two most popular locations for swimming in Abkhazia, the graphs of changes in the average water temperature throughout the year are as follows: 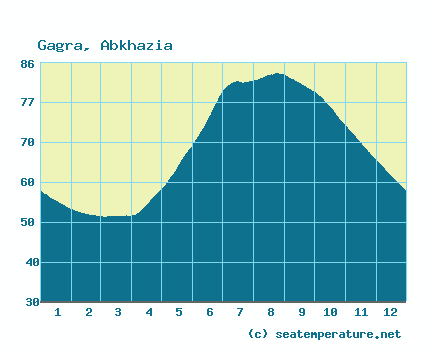 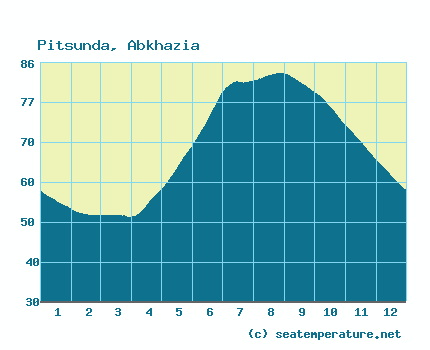 We process, analyze and store data for every beach and city in Abkhazia. Below is a table with current weather data and trends in some places of the country.

Abkhazia, being an unrecognized (disputed) territory, is located in the Caucasus. This territory is washed by the Black Sea. Abkhazia - has a fairly long coastline. To determine the temperature of the water in it, we track 13 settlements and resorts.

The climate of Abkhazia is as diverse as its relief. On the coast, it belongs to the humid subtropical type. The average January temperature here is + 6 ... + 8°C, August - + 23 ... + 25°C. Since the country is reliably protected from the influence of cold air masses from the north by the mountains, the winter here is quite warm, but snowy. In December - February, frost and snowfall, albeit short-term, occur annually, but usually do not last long. Spring comes here early - already in April everything blooms, and the air even at night does not cool below + 10°C. Summer is hot (+ 23 ... + 27ºС, sometimes up to + 37ºС) and wet - the average annual rainfall reaches 1,500 mm, the average monthly rainfall is 220 mm, which is close to the record for the Black Sea coast. True, summer rains are mostly short-lived and almost do not reduce air temperature,but cloudiness is sometimes very dense (however, this does not interfere with the quality of tanning). But for older people and those suffering from certain types of pulmonary diseases, the features of the local climate should be taken into account - a combination of high moisture