At the moment on the beaches in Large Lakes the water temperature is very low and not suitable for swimming.

The most popular resorts in Large Lakes over the past week

The warmest water in Large Lakes was recorded today in Oshawa. The water temperature in this location is 36°F. And the coldest in Baraga, its value 33°F.

Indicators of changes in water temperature values throughout the year are important. For the two most popular swimming location in Large Lakes, the annual schedules look like this: 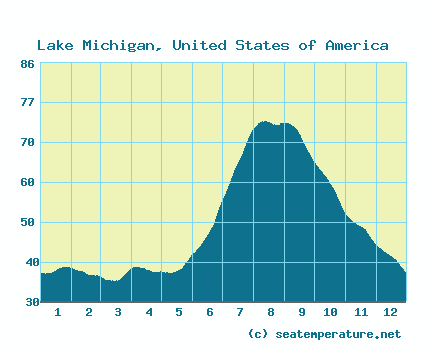 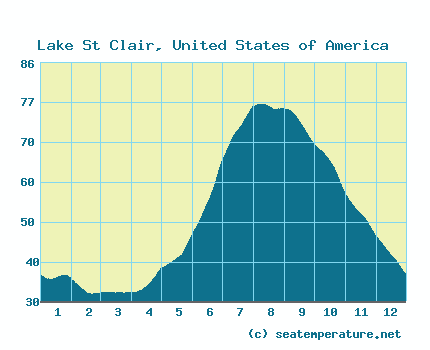 The Great Lakes are a system of freshwater lakes in North America, on the territory of the United States and Canada (Lake Michigan is located entirely in the United States, the other lakes and the short rivers connecting them are the border between the United States and Canada. It includes a number of large and medium-sized bodies of water connected by rivers and straits. The Great Lakes proper include the five largest: Superior, Huron, Michigan, Erie and Ontario, although sometimes they include Lake St. Clare, they form the largest group of freshwater lakes on Earth.

The climate of the Great Lakes is a humid, temperate type, similar to the climate of the Middle Baltic. The Great Lakes region is characterized by sharp changes in meteorological conditions. This is due to the proximity of areas as diverse as the cold Hudson Bay in the north and the very warm Gulf of Mexico in the south. The most variable season is winter, it is snowy, there is an active cyclone activity. Cyclones are also associated with frequent incursions of the Arctic air at this time, leading to a sharp cooling, while sometimes areas important for navigation are frozen in a few hours. In winter, ice first covers Lake Superior, then Huron and Michigan, and lastly Erie. The lakes are not completely frozen in ice, but navigation stops, becoming impossible from December to April. Spring lasts a long time, frosts are frequent. Summers are cool, like winter, changeable, with frequent rains and strong winds. Autumn includes a period of up to two weeks, called «Indian summer» with clear and dry weather. Autumn is considered the best season in the Great Lakes region.